Trendsetting and the different work of grandma Kane 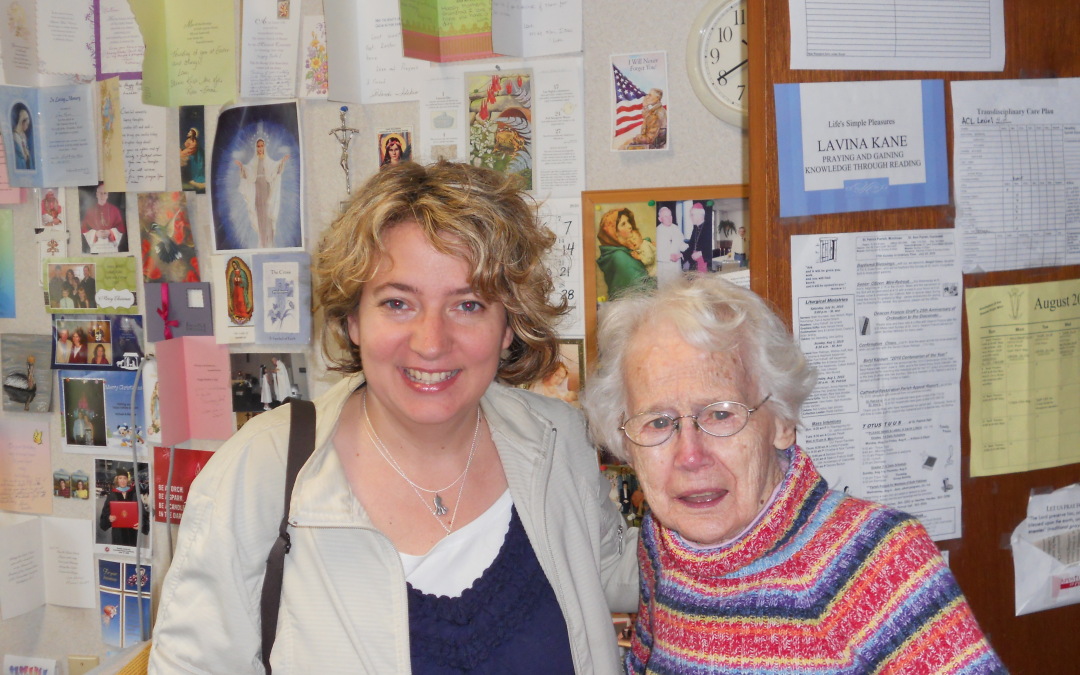 My Grandma Kane, LaVina Kane to her friends, passed away this week, just one month before she turned 100. She lived on her farm into her 80s, in her own apartment until she was in her early 90s, and in the past 7 years she earned the nickname Speedy at her nursing home, because the staff had to constantly tell her “Slow down!” When she was a preteen, her mother decided to pull her out of school to help look after her brothers and sisters and the house. She snuck onto her father’s wagon as he was leaving home and convinced him to let her move in to the Catholic school, miles away from their rural South Dakota home, so she could keep learning. On the fly, she then convinced a group of priests and nuns to let her move into the attic of the dormitory, because all the dorm rooms were full. She went on to several years of college and then began teaching school (most years, all grades in a one-room school house) in her early 20s, and she taught many years before she married in her late 20s and became a farmer, large-scale gardener, mother, grandmother, and great grandmother.

Reaching 100 years seems more like reason for celebration than sadness, I keep telling my heart, but I’m sad anyway. I’ll miss her face. She is the reason I love to garden, love herbs, am fascinated by all plants really, and like to dig in the dirt. She’s the reason I believed in composting long before it was cool to do so and why I’ve been home canning food most of my adult life, a popular “trend” in Seattle now. Turns out, she made me a trendsetter by sticking with what she loved—and sharing that love with us—even when some people around her (in my 1970s childhood) thought she was crazy for doing many of the things she did. You know, crazy things, like exercising daily, recycling, making your own yogurt, minimizing the use of sugar, eating dried fruit instead of candy, and using aloe vera to sooth a burn.

I’m writing a book right now called Different Work, about people who deeply love their work. Part of the reason I’m doing this is because I deeply love my own work—and I almost always have—so these days people often take me out to coffee to pick my brain about taking a leap away from jobs they hate, work that drains their energy, or organizations that they’re no longer proud to be part of. I tell them my story, but I know that my story doesn’t work for everyone, so I thought it’d be cool to gather stories of people doing work they love, working beyond their own “I shoulds” about work, and changing what work looks and feels like for themselves and their families, communities, and organizations. And it is cool. As I’m meeting these people and co-writing these stories, I’m feeling emboldened, empowered, part of a community I didn’t know existed, hopeful for humanity as a whole, hopeful that I’ll be able to continue doing work I love, more certain that I’ll be able to support others in doing the same.

It occurred to me last night that my grandma Kane’s story could be in this book. Doing work you love brings a stillness to your soul—a peace that radiates out in all directions around you. She showed me this without ever speaking on the subject. She also showed me that staying on a path of doing work you love isn’t easy, either. It’s more like leaping, from stone to stone, across a river than it is like walking on a groomed trail. You’ll encounter people who have other plans for you, like her own mother had for her. You’ll find people who cannot imagine that what you’re doing will work and who may even think you’re crazy, like many of the other adults around her in the 1970s and 80s. She surrounded herself with co-workers who could co-imagine these “crazy ideas” working. For my grandma Kane, that included classroom students, friends, children, grandchildren, chickens, cats, herbs, peas, potatoes, carrots, beets, and strawberries.

So, for me, trendsetters aren’t people who have unusual skill at divining the future, uncommon access to data and money and power and resources, or an innate need to jump out ahead of everybody else. Trendsetters are people who stubbornly stick to being who they are and doing what they love and who surround themselves with others being and doing the same. People like LaVina Kane, who, I suspect, is co-organizing senior-citizen’s gardening and exercises classes in heaven as we speak.