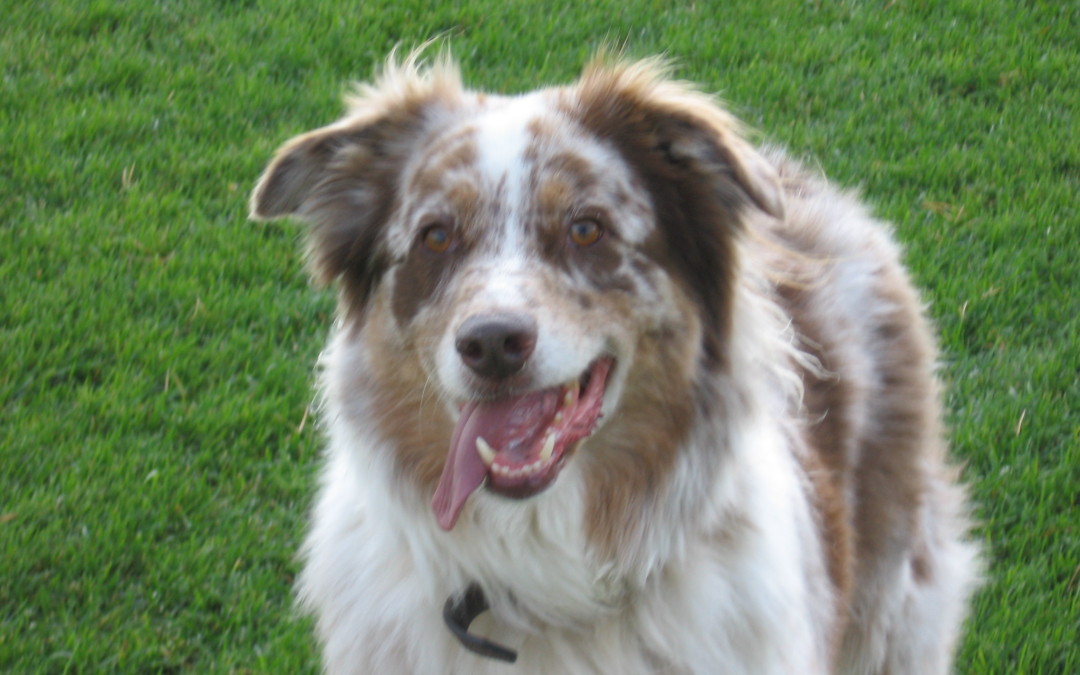 Monday evening I decided to go on an unannounced neighborhood Walkabout. I actually planned just to go from the backyard to the front yard, but a squirrel caught my eye and before you know it I was at our corner store. At this point, I was kind of freaked out, I’m never away from my family, so when this very nice-smelling nice guy (Nathan) walked by, I followed him. His kind heart, short hair, and plaid shirt reminded me of of our housemate Chris.

As it turned out, Nathan lives a LOOONG way from our house. Lori tells me its more than a mile that I followed Nathan home. Nathan was so cool. He fed me dinner, played with me, even watched TV with me. Sasha–his 2-year-old black lab–was nice but that young dog energy was a bit much for me. After the long, sometimes scary walk, I was feeling all 11 of my years. Nathan also took my picture and posted a FOUND DOG ad on Craiglist, called after-hours Animal Control and got my description on their lost dog hotline, and eventually talked to Tom at Central District News, which is where Tom connected him to the LOST GRADY announcement Lori and Daniel posted.
Only after they found me did I learn what all the fuss was about. It turns out, my new sock-monkey collar (which I adore, BTW, it’s so me) didn’t have my name and phone number on it. My name and phone number was on my old collar, laying on the table, back at home. And apparently the absolute worst time to go on an adventure like this is at 5:30 p.m., during rush hour through our busy Central District neighborhood in Seattle. Not that I knew what time it was. They haven’t sprung for a watch for me yet. Although today they’d give me my own GPS device if I asked them to.

I was a bit stressed being so far from home, but it wasn’t until Daniel,  Lori, and Chris came to pick me up that I realized the level of family stress was off-the-charts high. Lori started crying when she saw me. Even Daniel got teary-eyed. Lori hugged Nathan. Then Daniel hugged Nathan. Chris was the only one who held it together. Poor Nathan, I think he thought they were both nuts. After all, I was fine. I’d only been gone a few hours. Nathan refused to accept reward money, even though Lori and Daniel were practically throwing a pile of money at the poor guy. Silly humans.
Lori has since told me about the heroic efforts of the neighborhood on our behalf. Apparently, spontaneously across the few hours I was missing, Emma (my dog buddy) and 8 humans joined the search on foot and bike. Kristine and Chris–amazing housemates. Bailey and Scott and Susan–amazing neighbors. Even our new neighbor Amie, who we haven’t even met yet! And several complete strangers who happened to be out walking their own dogs past our house joined the search. I don’t know why this generosity is always such a surprise to humans. Humans, like dogs, are helpful, generous givers at their core. Seriously. How do people not smell this?!
I also learned that Tom at CD News helped get Nathan my name and phone number. Looking forward to meeting Tom soon! We went to Ezell’s and ate fried chicken to celebrate our reunion, and I got to sleep on the bed that night! It was awesome! The cats were so pissed!
Today, all’s well. I have an awesome new jingly tag with my name and phone number on it. I humored them and let them get the one with Animal on it. Neighbors keep emailing us saying they’re glad I’m back. I admit that I’m feeling like a bit of a local celeb. Lori and Daniel, who have loved our neighborhood for the whole decade we’ve been here, have an even deeper appreciation for the CD. Some humans from other neighborhoods may call our neighborhood “dangerous” but we know better. We stood in an alley, after dark, crying and hugging a generous stranger, for crying out loud! There is connection here, closeness, community, and, perhaps most importantly, home after home full of people who love dogs! One neighbor even told us a story of another dog being found during the same search for me. 😛
Lori tells me that I’m the best community revealer she’s ever met. This makes me wag. She knows a lot of amazing community revealers. Because of my ability to smell kindness, I know my story of deep human kindness and generosity is not the exception to the rule. That other story about humans—the one in which you’re untrustworthy and just out for yourselves—may get more press but that doesn’t make it more more true. Dogs really should be writing the news.