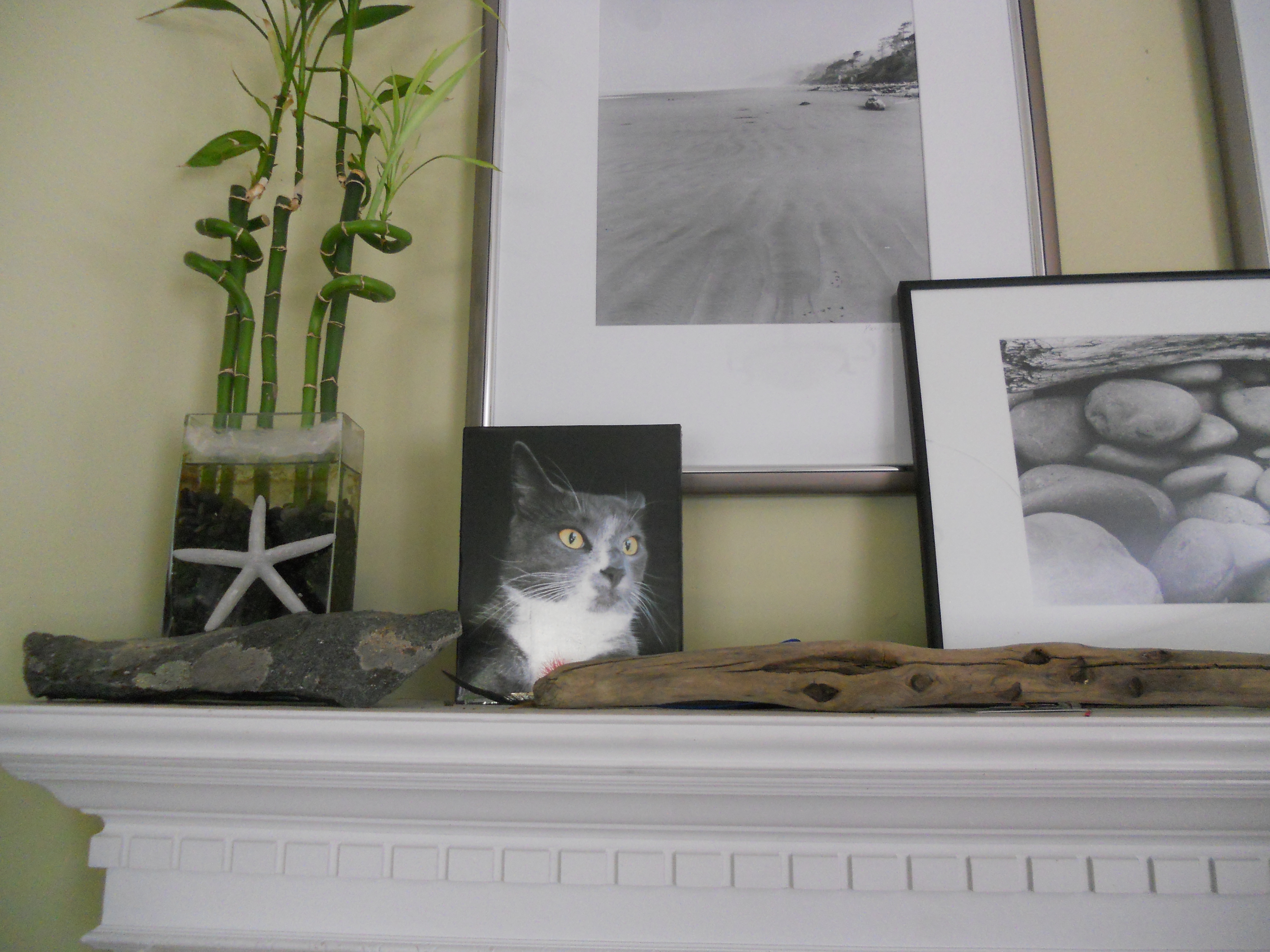 I just came across this picture of Bonzai from December 2010.

Like many indoor cats, she had a thing for lying near—and ideally laying on—laptop and computer keyboards. She preferred our older Mac laptop, which put off more heat that our PCs and newer Mac laptop. Like many cats of her generation, she felt that lying on newspapers was just too old school, too 1995 (although she’d curl up on a book or magazine in a pinch). This photo shows her amazing ability to be both sound asleep and watching you with one eye, almost as if that green eye was awake and standing guard while every other part of her rested.

When we got Bonzai, I was so excited to get a little girl cat that I had many pretty feminine names picked out ahead of time: I’d narrowed it down to Jane or Pru, short for Prudence. But in less than 3 hours with her, I knew my hopes of a pretty, feminine name would need to wait until the next little girl entered our lives. This kitten’s wild, rough, and tumble personality was no “Prudence.” She performed “flying headbutts of love.” She would run at you full speed, leap straight up your body (whether you were seated or standing), and mash her little face against yours, purring the whole time. She was half gray fluff ball of love, half kamikaze. So we named her Bonzai. We figured it would one day evolve into Bonsai (with an “s”) when she grew old and fat. (Bonsai means “potted plant” in Chinese.)

She loved the fireplace. And stealing stuffed toys from the dogs.

She spent the next 2½ years living up to her name and demonstrating to anyone she met that she was, indeed, half fluff ball of love (following people around the house like a dog, purring non-stop, and curling up on whatever lap or laptop was available) and half crazy cat (using our clothes closet as a climbing gym, running at breakneck speeds, and perfecting her “hit and run” play technique with any dogs, cats, or humans who came in our front door).

But in March—two months short of her third birthday—our crazy, bouncy, head-butting, energetic cat stopped playing the way she normally did. She was still alert—still mentally interested—but her body just stopped being up for the task. We weren’t terribly worried at first. After all, she was a young, healthy, indoor cat. We had no idea it would be something serious.

As she continued to get worse despite everything we tried, our vets finally ruled out everything else and told us the bad news. She had FIP, a disease that is 100% fatal, is very rapid in the most common form (which she had), and is worse than cancer because there is absolutely nothing that can be done about it. She likely had only weeks or days left to live.

Friends stepped in to support us and help us. Letting go was hard. And sad. And joyful. And inspiring. And powerful. And connected us to each other and those around us in new ways.

Daniel and Bonzai comforting each other

Grady watching over Bonzai (who is under the blanket)

Daniel sleeping on the sofa to make Bonzai comfortable

The day that Bonzai passed away was tough. We moved through the experience as a group this time and that brought our focus wider—to the beauty and the love and the friendship and the fun we shared as well (not only on the individual pain we were experiencing).

I’ve been present at the deaths of others, but this time I had an unusual experience. As she passed away, an image of a large, well-lit castle (or maybe it was a hotel) came into my mind. I got the impression that the light was turned off in the room my friend was staying in as she left the room and closed the door. But I was certain that my friend was still there in that beautiful, well-lit castle. Sounds a bit strange to me, but that’s what I experienced.

A few days later, I told this story to a friend who was losing her father. A few days after that, she told me her amazing story. Both she and her sister woke up in the middle of the night—both knew—the very moment that their father was passing away. Exhausted, the sisters had fallen asleep on a fold-out couch in his hospital room. She got up to touch his hands and say goodbye.

In the weeks that followed Bonzai’s death, friends showed up from all parts of planet earth to help our family in the transition. Stories from other pet people came flooding in. A new blog commenter sent me his condolences. Sympathy cards showed up. I didn’t even know there were sympathy cards for cats…

My computer genius, IT guru, photographer husband Daniel stepped outside his comfort zone and used his photography blog to talk about Bonzai (and used our experience to improve his work as a photographer). Here’s his touching blog post: http://blog.danieljgregory.com/inspiration/photographforlove.

This week, our artist friend Erik (who also sat with Bonzai in her last days while Daniel and I went out for groceries) gave us an amazing original piece of resin artwork with Bonzai as its subject.

The people and animals who came together during this time of need for our family are a self-organizing group. I say this because within it I see so many of the things that I’ve seen in the other self-organizing groups I’ve studied. This group supported the individuals within it, taught us, laughed and cried with us, brought us closer, allowed us to find more in ourselves than we’d individually imagined was there, caused us to slow down and reassess what mattered most to us, helped us let go, and even helped us bring more of our whole selves to our work. It did the same for some nearby others as well.

So, thank you, group and nearby others. And thank you, Bonzai. We miss you.