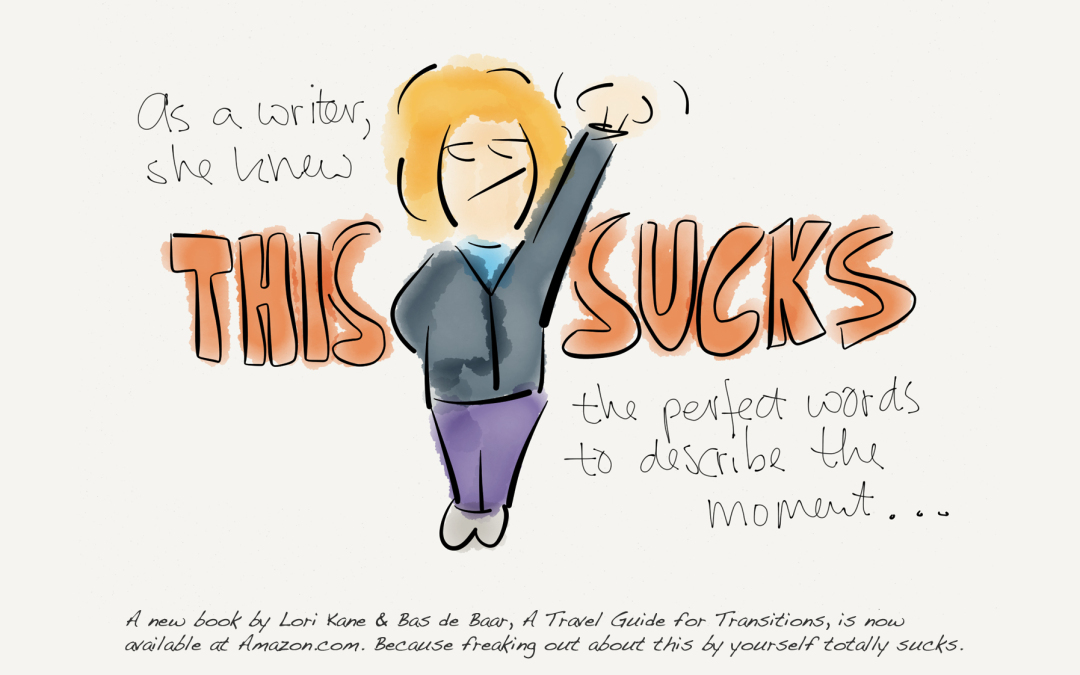 I love working with Bas. He’s part childhood pen pal,  part imaginary friend, part work colleague, part informal cultural attaché, and part best friend. And the fact that we’ve both been writing about transitions for several years without fully knowing we were writing about transitions dovetailed so perfectly, the timing couldn’t have been better for collaboration on this book. So I came into creating A Travel Guide for Transitions overflowing with enthusiasm and gladness for the opportunity.

Then a whole bunch of real life crap happened. April was an unexpectedly tough month for me.

No, that was my grown up filter using the words unexpectedly tough.

April sucked, my friends. It SUCKED.

Daniel and I adopted an 8-week-old puppy — my first puppy ever — and I got to learn some hard truths about myself. For example, I become a shell of my former self on just 4 hours of sleep per night. And to be my creative best self, I really do need  4- to 8-hour chunks of empty alone time and space most days. When I don’t get them, I flail and plot my escape and I questioned all my life choices to the point that I saw fear in Daniel’s eyes. That made me want to weep.

No, that was my grown up filter again. Made me want to weep, geez.

I spent 2 or 3 days each week in April weeping. I pretty much became the anti-me.

As it turns out, I am not the amazing puppy mom that I imagined I would be. I hate much of it actually. There’s a fun pill to swallow: I hate being a full-time mom. She’s just a tiny dog, arrgh, this should be easy! For frick’s sake, I have friends who raise a gaggle of human children with laughter and smiles on their faces most days!

Guilt piled high and dug deep within me this month. At least I can take comfort in the fact that 20- and 30- and 40-year-old me were all correct to trust their own intuition on this whole mom thing. No actual children were harmed in the making of this blog post or this life of mine.

Also during April my neighborhood partner-in-crime, Knox, left the country for a month, leaving me in charge of event planning for a giant neighborhood-spanning summer event. Ugh. Bleh. I love my neighborhood, and getting closer as a community, and I’m really looking forward to our new event (Yay Hopscotch CD–1.8-miles of fun!). But a solo large-scale event planner I am not. I can do it, and I’m even pretty good at parts of it (like blogging about what’s happening–surprise, surprise). But most of the tasks involved drain me of energy. Presenting to large groups? Convincing faceless strangers at the Seattle Department of Transportation that a temporary hopscotch path of flour, sugar, and water won’t hurt people? Bleh. Draining.

And there wasn’t much energy to drain in April, since I was running on 4 hours of sleep a night and already drowning in guilt about being a terrible mother, and partner, and friend.

Transitions help me learn about myself, and, wow, do I have a lot to learn.

On the up side, going through several transitions at once meant that I got to learn about myself in almost record Lori Land time. Didn’t feel like an upside at the time. Felt more like I was a bug being stepped on by a giant shoe and its deliberately nasty wearer.

I asked Bas for forgiveness for working far slower than I had planned. Instead of being upset, he drew me a funny “This Sucks” doodle, and checked in with me to see how I was doing more often, and then sent me an amazing map doodle of Lori Land (yeah, that’s going in the book!), and then he did an entire fun doodle trailer for the book so I could imagine the end.

I asked Daniel for forgiveness too, repeatedly, for dumping so much on him and being so entirely not myself for so long. Really, you’d have to go to reality TV to find a worse wife than I was in April. He of course was amazing. Doing more puppy parenting, working from home so I could get a little time to myself, picking up home and yard chores that I usually do, making me juice.

Asking for forgiveness comes easily to me now, it seems. But forgiving myself? That’s apparently what I’m working on now.

Don’t beat yourself up if this is not your time to savor a transition.

Ask for help or at least allow yourself to be helped.

Make time for self care, even if this means allowing others to do a whole lot extra for you right now: people who will help you make time for yourself.

Forgive yourself and survive this time around.

“You can always savor the next transition, right?” I said to myself this morning. “And ditch the guilt, girl. It’s just not you.”

And in an instant, the moment I feared would never come again is back.

I’m back to savoring.

Back to wanting this exact life.

Back to work as play.

I even love that damn little puppy.