How to read a mind across thousands of miles/kilometers 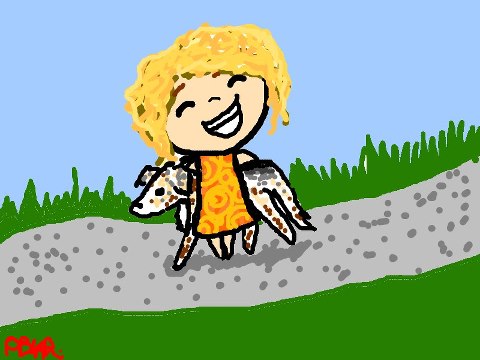 Reading a human mind across great distances is easy for some. I have friends who do it all the time.

As near as I can tell, we need just three things to do it: dear friends, silliness, and our true self. Pain also works, but I recommend silliness over pain when you can swing it, which you often can with dear friends, I’m learning.

At some point, friendship + silliness (or pain) + your true self = knowing each other’s hearts. And when we know each other’s hearts, and trust each other completely, it’s only a matter of time before unbelievably cool things begin to happen. Mind reading is just the tip of the iceberg.

So let me tell you about three dear friends of mine: Bernie, Natalie, and Bas. I love these humans. Writers all. Silly all. Perfect playmates for me all.

I haven’t met them in person yet. I’ve known all of them for roughly 1 1/2 years. None of them live close to me: Bernie, at 2,200 miles (~3,600 kms) away is the closest, while Bas, at 7,900 kilometers (~4,900 miles) lives the farthest away. They aren’t my only friends who read my mind recently, but they are the three who did so from the farthest distance, which makes them Olympics-level champions at mind reading. And they are all people with whom I feel 100% free to be myself. Not my day-job self (not that I have one of those anymore) but my whole, true, silly, fun, frustrating-at-times, wending, messy self.

I noticed this year that sometimes these people read my mind. Sometimes they appear to feel what I need—before I can recognize what I need—and they’ll share just what I need, just as I need it. All of them have anticipated a difficulty for me and taken steps that smoothed my way. They’ve all taught me what I needed to learn, just when I need to learn it. I am amazed by this ability and can’t say much about it (ha! yeah right) except that it very much appears to be more a function of heart than of head.

That, and it feels like magic. It makes me feel 6 years old again, back when I could believe in magic because I could feel it.

Let’s skip to the examples.

My beloved Bernie invited me to join a Google+ group this past month, saying “this group is a “little” “heady” – but I thought you might enjoy and perhaps give it some soul.”

That week, I’d begun quietly removing myself from many “heady” Facebook and Google+ groups—that is, groups in which the vast majority of what goes on is talking about, debating, and arguing about theories. “Too much head, and not enough heart and soul” had been in my mind as I decided which groups to leave, although I love Bernie’s shortening this thought of mine to “heady.” I didn’t tell Bernie that I was doing this. I didn’t tell anyone. And I haven’t pulled myself out of a single group that Bernie is part of, so he couldn’t have witnessed it. But there he was, telling me to improve a heady group by giving it a little time and bringing it the soul it needed. Wow. I joined the group he recommended and decided to stick with one of the groups I’d been about to leave a while longer. He’s right. They need me.

As my heart was quietly breaking over the life-threatening illness of our dear dog Grady in mid December, she prompted her talented artist daughter, Frankie Blue, to make me this avatar.

I love it. And it came at such a perfect time I couldn’t quite believe it.

Later, near the end of December, in my own mind I made the decision that we would need to put Grady to sleep. He hadn’t eaten a meal of his own volition in almost 5 weeks. He’d dropped from 53 to 39 pounds, despite the fact that we were syringe feeding him more calories a day than he used to eat. He began to lose the ability to walk. Nobody knew of this painful thought in my head, not even my husband Daniel, because it was too hard to give voice to.

So I was feeling alone, beyond sad, and in a stunned, helpless place that meant I wanted to speak to no one and do almost nothing. I felt wretched. I knew I’d be saying goodbye to one of my dearest friends of the past 12 years in the coming week. I felt horrible for making the decision at all and also horrible for not making it sooner. On December 29th, beyond hanging out with Grady, I had energy for just one thing: I read Facebook to see what some of my favorite humans were up to.

And I found this list, created that day by Natalie, for me, apparently completely out of the blue.

This gave me the courage to talk to Daniel about Grady being ready to move on. Without words exchanged, and from the opposite corner of the country, Natalie’s heart knew that mine could really use this right that moment. Wow.

And then there’s Bas: my creative partner-in-crime who has rapidly become a new best friend this year.

From The Netherlands, Bas so often reads my mind and anticipates my needs that for me it now feels like a completely commonplace state of being for humans who live on different continents. He shares links to articles almost the moment I think to myself “Hmm, maybe I should read about that.” He uses new-to-me words that feel like they were just on the tip of my brain, waiting for me to say them out loud: this fall, words like the slow web and transplanetary storytelling. He shares ideas that I recognize as mine the moment I hear them: “Maybe we should call Different Office a creative co-op?” (I’d thought this weeks prior but failed to tell him about it before he thought it too.) This fall, when I was freaking out because roof patch repair folks accidentally trapped four baby squirrels in our attic (while Daniel was away on business, of course), Bas and Simone (his fantastic wife) worried across vast distances about stressed-out me and mama squirrel and her babies. They sent us music to sooth our souls. It worked. It took 18 hours–the last few of which we were all rocking out instead of stressing out–but we got all four babies reunited with mom.

So how do you read a mind across thousands of miles/kilometers?

I know it has everything to do with being dear friends, being silly together, sharing your pain, and sharing your self to the extent you possibly can. I know it has something to do with profound trusting of your friends, your self (at least for a moment), and the nature of the universe (again, at least for a moment)–a trust so profound that it lives beyond individual thoughts and the skeptism of grown-ups-ville. And I know we don’t control it in the traditional sense. We don’t think our way into it exactly. We believe in each other, we care for each other, we give our attention gladly to each other, and somehow we make and find space for the amazing to show up and happen.

I don’t think we learn how to do this at all. I think we wake up and remember that we can. We unlearn that we can’t. We remember the existence and the power and the sass and the amazingness of the 6-year-olds still within us, always within us. Turns out, those 6-year-olds are still holding hands.

For more perspectives on the subject, consult your own 6-year-old self and the people you are silly with. You could also maybe ask Bernie, Natalie, or Bas if the mood strikes. They may call me crazy, but from my perspective, they are all old hats at this.