What is a self-organizing group?

If you’re familiar with this subject, let me know what it means for you. Today, for me, a self-organizing group is a collective whose members are surprised and delighted by what they become and do together. These collectives create themselves and contain members who become increasingly aware that the group is giving them more than they could imagine and plan as individuals. I study self-aware self-organizing groups: groups in which members recognize that the group itself is something special. 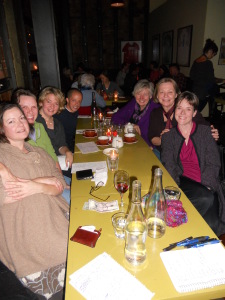 These collectives come fully into existence the moment group members recognize any of the following things:

The collective becomes self-aware–through its group members and nearby others–that it is something unique, special, and important.

These collectives communicate a lot without words. They demonstrate more through group members’ energy, laughter, enthusiasm, humor, feelings of gratitude and growing fearlessness, and the ability to let go than they do with words. Diverse nearby others are drawn to them because of it. Nearby others drawn to the group notice that the group is different, pay closer attention, recognize the group in themselves, and try self-organizing at the group level for themselves.

These groups distinguish themselves in another important way. Other groups allow individuals to believe that it’s primarily individual plans, strengths, talents, attributes, background, and expertise–and the details of what people are and do as individuals–that sets them apart. These groups don’t.

Self-organizing groups appear to form around the eternal (that is, around things that persist across human experience, such as love, friendship, laughter, joy, fellowship, and passion) and can, therefore, themselves be very long lasting. Within them, self-organizing work groups naturally form to get specific work-of-the-moment done. Responding to the needs of the moment, those who most urgently feel the need come together, anticipate the need on behalf of the group, and then do the work that needs to get done. When that work is accomplished, the work group dissolves as quickly as it formed.