The beginning of certainty: a chicken’s tale 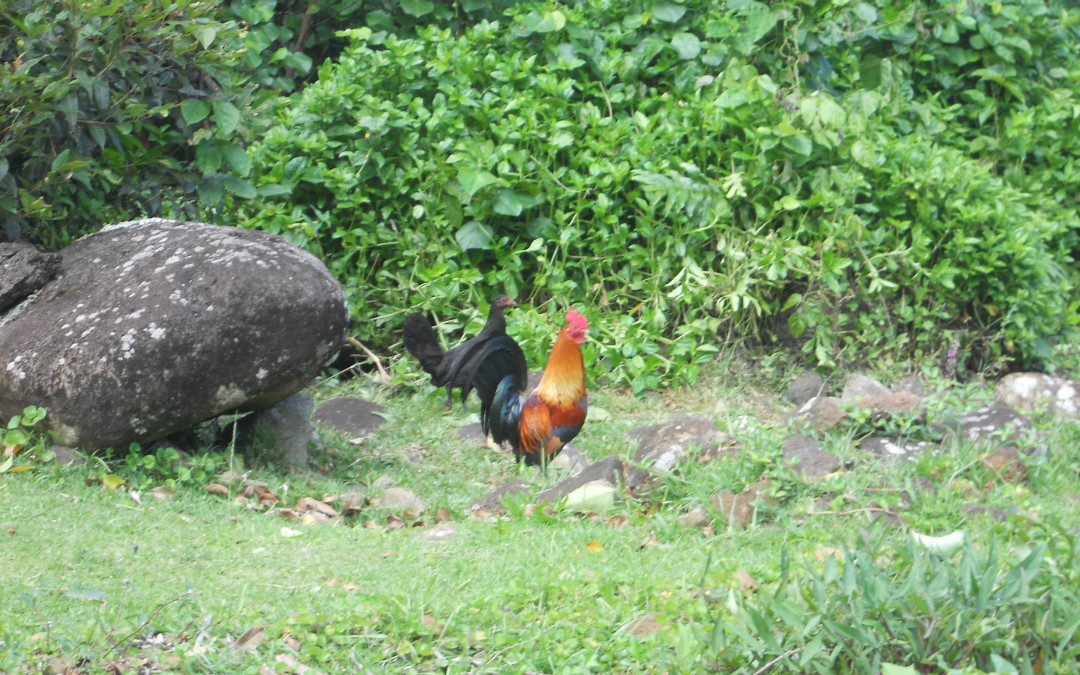 Back in August, I wrote about experiencing my self as different states: individual, self-organizing group, community, and planet and the beginnings of what it feels like to move between those states. It was my favorite 2011 post because it was a mysterious ball of emerging ideas and also the scariest thing I’d said out loud all year. I feared people would think I was nuts. Feared I might actually be nuts. Yet it was my lived experience. It was true for me. I sensed and knew that it was important to share these experiences. Sensed. Intuition. Mysterious. Ridiculously scary words for a researcher to use. Banned, unacceptable words.

That post wrote itself while I watched nervously. Clicked “Publish” while I trembled and wondered “What the hell am I doing?!”

Turns out, what I was doing was peeling a blinder off my own eyes. Revealing another doorway to walk through. Creating a tiny peephole for myself to move through and into a vast, new, amazing community.

That’s one possibility that can happen when you say your most confusing, puzzling, and scariest thing out loud. Community. Friendship. Fun. Joy. Peace. States that are already there, I’ve learned, just waiting to be discovered. Instead of being dismissed or rejected, I was embraced. Embraced by my peeps. The people who matter most on my journey.

Daniel stopped complaining that my posts were too long at that point and said “I don’t understand how you generate such high quality content week after week.” Wow. Thank you honey. We suspect that falling in love with your life/neighborhood/work/community/self is key. And for me, community and self-organizing groups, are key. Your keys may be different. We hold our own keys.

At the same time, new friends began to emerge…

Anthony Burgess showed up. He asked me “What does the space between these states looks like?” Wow. I’d been wondering that myself and have been moving in the world and thinking about this ever since. Have been keeping my ears on him, and what he says, ever since. He’s a fellow space traveller.

Bernie DeKoven showed up around that same time. I remember him saying “I think what you’re saying is that community purpose becomes the same as individual and small-group purpose.” He was right, and he’d said it better than I had. So I changed the language in the post to reflect what he’d said and I thanked him. Bernie offered more than advice, though. He offered fun. Play. Got my attention. Somehow, I managed to get his. Last month, he offered himself as work (aka, play) partner. Wow. Can’t wait to see what we do next! Me and this person I mentally hug quite often.

Bas de Baar showed up around that time too. He offered fun co-learning. I offered to work with him and, as is his way, he said YES! Co-creation. With someone on the other side of the world. This is fun. Since then our shared work has brought community, learning, fun, joy. And we’ve also shared our individual doubts, struggles, and frustrations. And our not-obviously-related-to-work joys, like music, travel, and our spouses’ shared love of photography. Across an ocean we’ve co-felt the weirdness of learning that as you hit 40 you (well, we) actually get younger, not older, simply by allowing work and play to merge into one glorious fun-hard-rewarding-fun-again thingy.

Seb Paquet came into my peripheral vision about that time as well. I don’t remember how. Google+? I remember liking Seb as a person from the beginning. It wasn’t his ideas (although those are great too). It was who he was. Kind, funny, and brave. A fellow embracer of chaos. Admits he doesn’t have all the answers. Or even the questions. Shows up to learn. Love that. I know it’d be fun to work with him. I know with 100% certainty. We’ve recently started playing together as well. Pulling a group together. A playground, he calls it. Nice.

Also at that time, some kind soul, I think it was Bert-Ola Bergstrand (another stranger at the time), added me to a handful of Facebook groups: Coworking Worldwide, The Next Edge, Presente! (an alternative education group), the SOCAP Network. Love this new generation that connects and shares with almost no fear. If I do nothing else in life I will reward this faith in humanity. I was welcomed into these communities with open arms: communities I didn’t know existed, let alone that I was part of, until I got there. Like an unexpected party down the block that you somehow snagged an invite to. New friends have emerged from these communities. People I now trust. Care about. Respect. Love. Emotionally local in my Seattle nerd-researcher speak. People like David Hodgson and James Burns and Bernard Boulanger. People who don’t mind a little Seattle nerd-researcher speak. 😉 People who like me for me. In all my long-winded, convoluted, prefer-clues-to-answers, often-does-things-backwards, get-to-the-frickin-point-already glory. And who I like for them: people willing to share an amazing amount of themselves with a stranger. With me. Which brings us to the beginning of the point.

In 1997, a personal hero of mine, Ilya Prigogine, wrote the book The End of Certainty. I cherish this book to my core, eventhough I understand, oh, maybe .05% of it. He was a chemist fascinated with self-organizing systems. A student of irreversibility. Sensitive to how important beginnings are. He demonstrated that determinism—that certainty itself—no longer holds given all we’ve learned as a whole. That we live in a world where unstability is the norm. Where predicting probability is the best we can expect to do as individuals. I couldn’t agree more with these ideas. But the ideas aren’t what matter most. What I love most is who he allowed himself to be become: a person with kind eyes and listening ears who so valued and understood the work of his personal heroes that he expanded it, adding to it, and co-creating something with living and long-dead friends.

In my experience, admitting that you live in a world where unstability is the norm can be scary and painful. And yet it also means living in a world where the wings of a butterfly deeply matter. A world in which wonder and mystery and gratitude and joy are woven into our knowledge gathering and periodic logical, rational assessments. Let me say those words again. Wonder. Mystery. Gratitude. Joy. Across the whole span of our lives and far beyond the walls of Disney World where some of our predessors thought these silly things should be stored and taken out only for children’s parties.

In Ilya’s honor, that’s what we’re doing right now. We’re adding something to what he said. Co-creating with him. This time, thanks to you, my individual fear is a flicker of its former self. As this post writes itself I cheer it on. Encouraging it to emerge. Go us!

Anthony, my friend, maybe the space between is itself the structure. The fluid, the moving, the laughing, the empty, the chance-taking leaps, the questioning, the clue following, the clue leaving, the light reflecting, the opening. That is the structure. Our structure moves and breathes and lives. This structure lives on while walls collapse.

Bernie, we are free range chickens: born from deep fun, moving with deep fun, becoming deep fun. For the dual purpose of A) deep fun, and B) exploring our full chickenness. Why else would a chicken cross a road? Thanks to Kim Field for first using the expression “free range chickens” to describe his self-organizing work group, and thanks to Natalie Kinsey for calling human beings “wild chickens” this week and reminding me of it.

Bas, you are one of a kind. And somehow also remarkably like me. Well. Except that you’re a guy. In the Netherlands. And a Project Manager. And technologically savvy. I love working with you. Can’t wait to see what we come up with next.

Doug, your presence taught me that crying is not only an acceptable response to life, but that it is a sign of self-boundary-breaking, which–in my story–also means boldness, courage, leadership, and bad-assness. I cried the moment I said out loud that I experience myself as an individual, a self-organizing group, and community and that I experience fear as an individual indicator that I’m at or crossing a border as an individual. I cry a lot. I didn’t used to know what that meant. It means I am an explorer, crossing many boundaries. Today my tears are also gratitude. A thank you beyond words for teaching me that it’s ok to be my whole self. I rarely cry from fear anymore, because I almost never approach self boundaries as an individual anymore.

So, let’s see. The point. Here it comes. Yes, I’m learning that, for me, the apparently unstable moments are the structure. They are me. They are us. As my yoga teacher used to say, it’s not about doing the individual poses perfectly. It’s about gracefully moving in the space between. Do that and the poses will take care of themselves.

Friendship, which, I recently learned, is a sea-going craft containing friends.

This is who we are.

And when I need certainty, which is part of me too, I can have that too. In the same moment.

Imagine a rag-tag gang of wild, free-range chickens, afloat at sea, riding a friendship and singing a song. My friendship looks remarkably like a surfboard: lean, light, unsinkable. May decide to hit you on the head when you fall off. On this friendship, one chicken imagines he’s a pirate. One paddles determinedly because she loves to paddle determinedly. One imagines elaborate new friendship designs to share with other chickens. One sings a catchy chicken folk tune. One breaks up cock fights. One longs for a life of chicken adventures and points his beak out to sea. All love what they’re doing and who they are. Most days. All are certain of nothing at all. Well, except that they are certain of each other, which is no small thing, is it?

That is the beginning, middle, and end of certainty, because that’s all we need.

This certainty opens our eyes to new possibilities in ourselves and others. Reminds us that we have wings and that we could fly into space. Or jump off the ship and snorkle. Chickens are born snorkelers.

I have become a Community Story Wrangler. The title Researcher had to go. As a storyteller and gatherer, I no longer fear words. You should know this about me. This chicken will wear intuition like a hat and mystery like a cape. They are part of who I am and to set them aside would wound the world I love, not just me.

We also just turned our home into a free community coworking space. A free range rest stop, if you will. Turns out, you can find community by simply recognizing your personal space as public space. Did you know this? I didn’t. My community taught me this one too.

In a moment, I noticed that all my work is actually play. For fun. For love. For community. Has been for years. I was often too worried to notice. Once I stopped trying to write my own ending, and just relaxed and began enjoying the story, my worry vanished and a flood of interesting characters appeared from the wings (of the stage, not the chicken, that would be weird) to help.

Together we’re living our own story. A tale of living fluidly, as uncertainty, while also stable, certain of each other, grateful, and having fun.

This is where our story begins.