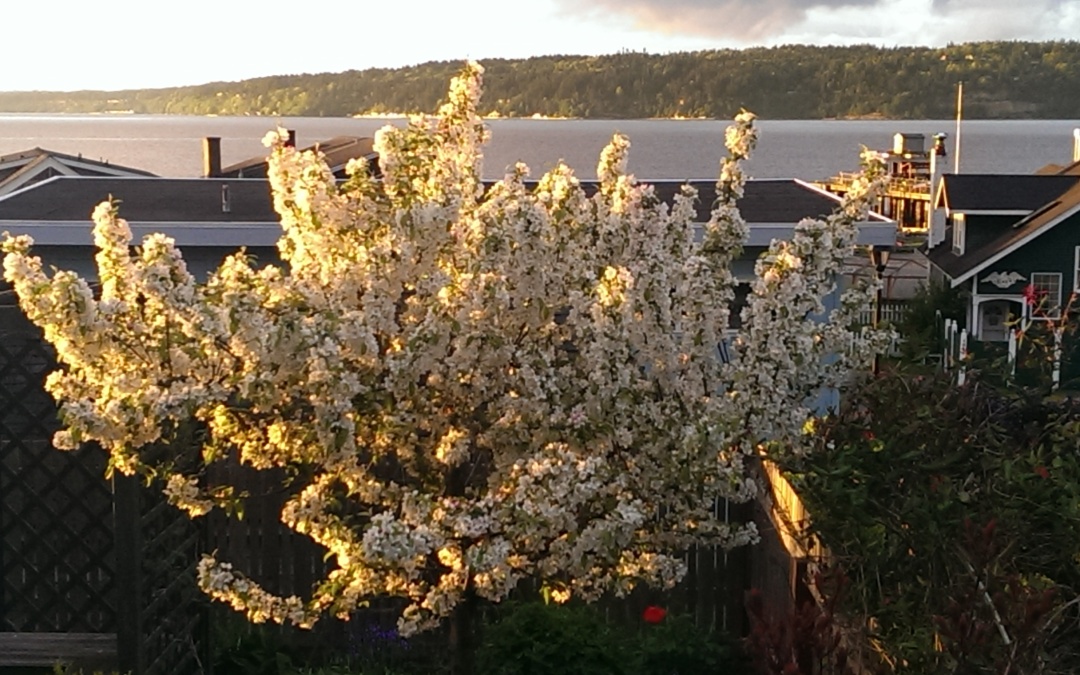 The point. For me, sustained creation appears to be the result of having self-chosen routine. I allow my life to revolve around two routines: an individual, somewhat orderly routine and a collective, chaotic routine, both of which I myself choose each day:

I create constantly now and with little worry about what I’ll create next. I suspect it’s because I have self-chosen routine. I have found, named, and accepted these routines. I create one and choose the other. I honor both. I love both. I do both. Even when they frustrate the holy crap out of me.

Writers and caregivers (and, I strongly suspect, most artists and creatives, including parents) seem to have a different relationship with chaos and routine than other humans. We may not always love routine, but at some point in our process we recognize that we deeply need it. We may not always love chaos either, but we eventually learn, usually after some kicking and screaming about it, that we are well served by chaos, too.

I prefer the original definition of chaos (vast chasm, void) to the common modern definition (complete disarray, disorder, confusion). But whichever way you define it, chaos teaches that we are not in control of everything, which leads to letting go, which helps us embrace/get past our petty side, which leads to lightening up, which pulls similarly lightening-up and getting-over-it friends to us like magnets. Together we laugh and cry more often than before. Similarly lightening-up friends + laughter + crying more often allow us to find even more beauty in life on good days. They help make our worst days bearable.

Our individual and collective self-chosen routines help us maintain the frame of being we need to make friends with chaos and order. These routines create a doorway, or a connection point, for little me to connect with the infinite. A way to approach the vast unknown regularly, willingly, and humbly. Together, they keep that door open.

As a writer I have a writing-centric routine that I can control, a little bit. As a caregiver I have a parent-centric routine that I have very little control over. Yet I can enjoy it, too, thanks to other members of Team Jinda. Thanks to both routines–one I can control a bit and one I have given up trying to control anymore–these days, most days, I experience chaos as an enormous, unfathomable artist’s palette, smeared with paints that are mixable by unending beings in unending combination.

That’s right. You heard me. One controllable self-chosen routine + one uncontrollable collective self-chosen routine with deeply loved others as partners in crime = one very fluid and non-stop creative Lori who drips creativity as she moves most days. Today, when I look at those massive photographic images of space that capture multiple galaxies spinning at once, I see a dancing ocean of artists’ palettes, each galaxy swirling itself around a center hole into which I am certain a distant artist puts her thumb to hold on for the ride.

I’m regularly asked “Don’t you worry that you’ll run out of things to write about?” and “How to you keep coming up with new things to say?” On the flip side, I also get asked questions like “How do you stay so focused?” or “Out of everything you could possibly write poetry/essays/books about, how do you decide what to do next?” It occurs to me that my answer to all these questions is the same. I don’t worry about it much. Because I have an individual writing-centric routine and a chaotic, collective caregiving routine. Both of which I love. Both of which are really hard and really easy. Both of which I chose again each new day. They keep me on track. They push me off it.

Together these routines usually allow me to find beauty in chaos. Some days that means standing in the center of hell, burning and raging, because the pain is so deep that rage and screaming is warranted. Routine is often misunderstood I think. Self-chosen routine isn’t for the timid. And it isn’t about taming or controlling chaos either. It isn’t ultimately about constraint at all. Routine is about giving myself enough time, and coming to understand myself enough, that I know how to open my eyes to what is. Know how to move myself into a state of being that is me again: conscious, aware, and able to recognize beauty in everything. The beauty of chaos when I’m in the state to see it is tough to capture with words alone. The closest word I can think of is “Wheee!” combined with that excited, empty-pit-of-stomach feeling we get when leaping from a great height while fairly certain that we’ll land safely.

So back to sustained creation…

It’s because of my connection to unending beauty that I don’t fear running out of things to write, ideas to try, things to say, ways to be, people to know, friends to make, options to see, perspectives to consider, work to do, and so on. Within unfathomable chaos is unending abundance. And I regularly stand in chaos. When connected to unending abundance, I also don’t fear looking stupid, because I know the very next moment I could look like a total genius. Looking stupid is no big thing when anything is possible the next moment.

Self-chosen routine also gives me the limits I need to find focus, know when I need to re-create something (I recreated this very article in January 2015: I first wrote it in April 2014 but it wasn’t finished), or create something new and finished for now.

I can hear the loving voices of my mountain of social justice-centered friends in my head. They tell me that not everybody has access to self-chosen routine. That to have it is a privilege. I hear you and believe you. My perspective is that everybody has access to self-chosen routine because for me access to the infinite comes from within. I watch as Viktor Frankl walks out of a Nazi concentration camp with a self-chosen faith in humanity. His parents, his wife, his brother all tortured to death at the hands of their captors. Even with all apparent power in the world, they couldn’t take away what he chose for himself.

I think there’s great power in deciding to see both your individual routine and your chaotic collective routine as chosen by you (little you and larger you). No matter what the world is doing around you. Because I see them both as chosen by me, I’m the one who gets to make changes at will. I’m not stuck waiting on somebody else. It helps me imagine them as a temporary structure that allows chaos to show up for me today in personally receivable chunks. It increases the chances that I’ll notice beauty. And the likelihood of me raising my voice and calling “Bullshit” when I don’t. I think of self-chosen routine as the tap on the faucet and one place that I can reliably go for water. Not that I experience self-chosen routine as easy for humans. It takes a lot of selves, pulling together, to make self-chosen routine possible for me here in Lori Land.

Without self-chosen routine, I get stuck in the mud of chaos. It makes me feel like a tiny helpless trapped creature. To the point that the idea of connecting to unending beauty sounds like a pipe dream, a fantasy, or a ridiculous and cruel joke. And the idea of being a really good poet, writer, and caregiver in this messed-up world can feel like both an up-hill battle and a completely lost cause.

In our family, there has been discussion this year about what makes somebody an artist. The artist men in my life have practically come to blows on the subject, which has made me laugh out loud on more than one occasion. I imagine our cats thinking “Artist fight!” Men. God love’m. As if it was important to agree.

For me, being an artist has to do with what we value. Fishermen value fish and fishing and the culture of fishing. Farmers value the earth, the weather, farming, food, and the farming culture. Artists value creation, and human creation, in all its guises, and we’re drawn to people who like to talk about humans and animals as creators. Those recognized by others as artists dedicate themselves to their creations and their individual routine, at least, reflects that. But to recognize ourselves as artists is something else. It requires dedication to our chaotic collective routine. To our larger self. Our individual routine revolves around creation to the extent it can–that pushes open our tiny doorway to infinity and then closes it. The choice to prioritize your own collective chaotic routine keeps the doorway open.

To have sustained creation in my life, I needed sustained access to the infinite.

The act of recognizing, naming, and owning both my individual routine and my collective routine has allowed creation itself to become my routine, while being supported by, and supporting others doing the same. It’s been about learning to let go and move on to the next thing when a voice from my own doorway says “Done. At least for now.” And about learning to never give up on the humans and the work I love most—even when they’re impossible. Simple, right?