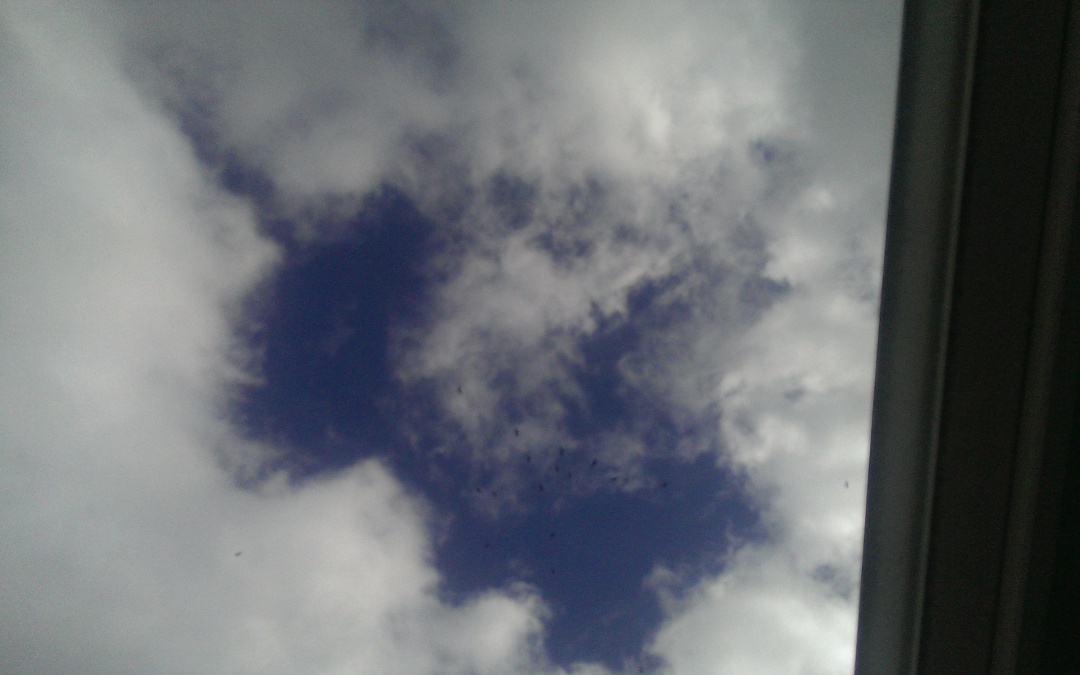 Our pair of resident bald eagles have been away from home for more than a month — off on a river fishing working vacation, we’ve heard from other neighbors — after their baby grew up and left the nest in August. I didn’t realize how much I’d miss seeing them every morning out the kitchen windows as I make tea. I miss them.

A few minutes ago, I heard a deep, ominous buzz coming from our bedroom. It was a mean-looking wasp who had flown in the deck door and trapped herself against the door glass trying to get back out. I sprung into action, herding the cats out of the room and then ushering her back outside with a magazine. She didn’t protest: flew out and up immediately.

As my eyes followed her ascent to make sure she was really gone, I saw one of the most amazing things I’ve ever seen. Way up in the sky, against the sun-touched clouds, there were 40 bald eagles dancing. I counted. As they circled and dipped together, it looked like a well-choreographed waltz: slow, relaxed, rhythmic. I’ve lived 22 years in the Pacific Northwest, and I’ve never seen anything like it. They danced and danced, slowly moving overhead and then inland.

I felt that this is a group of Whidbey-based resident eagle pairs, returning from their river-fishing extended family vacation and saying goodbye here, on the corner of the island, before heading back to their homes scattered across the island. There may be other reasons for who they are and what they were doing, but I know what I saw. It was amazing. And I would have missed it if that big, mean-looking wasp hadn’t decided to help a sister out.

I haven’t been a church goer since I was a kid. Hierarchically organized religions don’t feel right for me. But I believe in miracles. There are reasons for what happens beyond human logic, beyond human thought, and beyond what anyone else says we should believe in. Reasons that come to us from deep within, when we are annoyed, lifted off our feet by a buzzing wasp, only to find ourselves standing open-mouthed, awe-struck, alone and bearing witness to a sky full of dancing eagles.